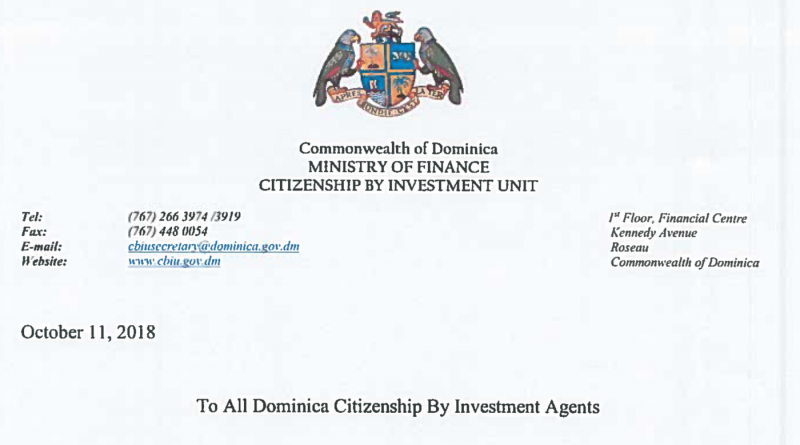 As Dominica’s CIU warns agents not to offer “special discounts” on citizenship, several agents say the CIU has been handing out inappropriate discounts of its own.

“The way the industry is promoted by some agents has taken a tone that we, in the Dominica CBI (sic), think is bringing negative attention to the industry. This, in our view, threatens our very existence!” said the statement.

“Several agents are using marketing techniques, including promoting by text blast, prominent display of passport images, and deliberately misrepresenting the cost of investment to make their offers seem lower than the official government fees mandated by law,” noted CIU-head Emmanuel Nanthan in the missive.

Also pointing out that most of the marketing campaigns did not even mention Dominica by name and, in fact, mentioned other programs, added that he wished to “make it abundantly clear that we do not want to be associated with the “special offers” nor “special discounts” etc. This is contrary to law and those who engage in such need to cease and desist immediately”.

While Dominica reprimands its agents for offering special discounts to clients, a handful of prominent agents have contacted Investment Migration Insider claiming the Dominica CIU has been awarding highly irregular discounts of their own; the CIU, they say, has an exclusive deal offering wholesale discounts of up to 50% off the government’s listed donation requirement to a company based in Sharjah, UAE.

The firm “is offering Dominica citizenships through the donation route for $160,000, including fees, for a family of four when, according to the government’s own listed rates, it should be $200,000 plus fees,” lamented a major Dubai-based agent, who did not wish to be identified.

The Sharjah-company, said the agent, has been reselling the discounted packages to other RCBI-consultancies.

“Our firm, and several other major CBI- have been trying to lobby Dominica to close this unjust side-arrangement. We’re fed up,” he added, emphatically.

*Update: A previous version of this article indicated that a Montreal-based company had received wholesale discounts from Dominica’s CIU. This is not the case.