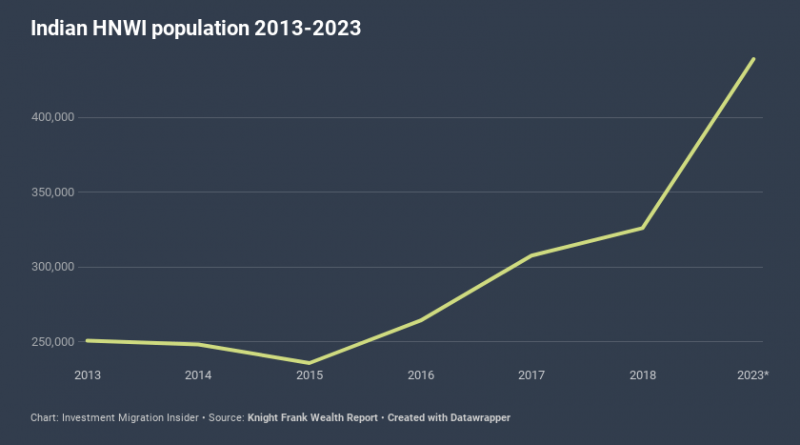 Home to nearly half a million millionaires with low mobility, India has more potential than, perhaps, any other investment migration market. The characteristics of that market, however, are in a state of continual flux.

Top choices out of reach
Up until a few years ago, India’s investment migration market was largely geared toward the US EB-5 program‎. The educated middle classes in India have always held the highly-competitive American education system in high regard and, as a consequence, EB-5 saw tremendous interest from families seeking a way to allow their children to remain in the country after graduation and work.

Not even extreme wait-times and a complex investment structure could stop Indian applicants who saw the program as a ticket to the meritocratic American dream. The UK Tier 1 investor visa, for much the same reason, has also never had a shortage of Indian interest; for the high-net-worth (HNW) Indian family, acquiring a property in London is a natural move. The overall quality of life and the home-away-from-home feeling that the UK invokes has always attracted significant foreign direct investment from wealthy Indian families. Australia and Canada, furthermore, are also key contenders in the subcontinental investment migration market, particularly for families intending to physically move to these destinations and eventually naturalize as citizens.

Historically, the primary catalysts for investment migration in India have been education, lifestyle, and “relatability” to the country. The US, UK, UAE, Canada. and Australia are home to considerable Indian diasporas, and these countries’ investment migration programs are always high in demand, despite high or sophisticated investment requirements.

Advisory services are an unfamiliar concept
The concept of seeking an alternative residency as a means of hedging your sovereign risk, however, is new in India. While the country is a singularly intriguing destination for new business, commercial growth for corporations, and high-yield investments, it is quite uncertain on where it stands on the topic of wealth preservation. Onshore private banking in India, for example, was virtually unheard of 15-20 years ago and the dynamic domestic market is still not convinced of the merits of such professional services.

India has not seen a proper financial crisis for at least two decades, and these types of firms still need to build more trust in the longevity and sustainability of the solutions they offer for generational wealth preservation. It’s a matter of time, and the time just hasn’t come yet. Indians, on a cultural level, are also slow to place trust in service providers of any kind. More so than in most places, RCBI firms entering India will struggle to gain the confidence of new clients and can expect a great deal of window-shopping. Prashant Ajmera covered this topic in detail here.

HNW families want a foot out the door so they can be prepared for any contingencies. These families are cash-rich and time-poor. They don’t necessarily wish to physically relocate to the places where they plan to acquire a second residency or citizenship. In fact, for most, these options only serve as an insurance policy.

Growing wealth and rising taxes
In the last six years alone, according to the Reserve Bank of India, the purchasing power of Indian HNWIs has risen ten-fold and overall outbound investment has leapt from US$440 million in 2007-08 to US$13.5 billion in 2017-18.

Read also: Indian Outbound Investment Up 10x in Six Years – The Opportunity for RCBI-Firms is Unmistakeable

India can’t seem to make up its mind on how high its general level of taxation should be. Consistent speculation on the matter continues to prompt HNW families to seek out RCBI-type services. Recent media reports indicating the government seeks to raise effective rates for the country’s richest families caused a stir. Furthermore, rumors that India is introducing worldwide taxation and estate tax on even non-resident Indians have circulated and have animated Indian appetites for citizenship by investment.

Countries around the world compete for HNW families and individuals (HNWIs) who bring with them entrepreneurial expertise, and these HNWIs tend to favour politically-neutral, safe countries with transparent legal systems that enable the preservation of wealth for future generations. Switzerland’s significant and successful transformation from what was once among the poorest countries in Europe to what it is today and Singapore’s emergence as a thriving Asian economy are two examples of countries that check all the boxes. For India to retain its HNW families, it must go down a similar path. For all the progress India has made in the last several decades, the backdrop is still one of a simmering political crisis liable to escalate. India is creating wealth at a rapid clip, but big chunks of it are leaving the country too.

European property starting to look cheap
The market capitalization of the country’s real estate sector has expanded prodigiously for the last five years and, by 2030, is expected to contribute more than 13% of GDP. But decades of uninterrupted value increases have, perhaps inevitably, given rise to inflated expectations and prices. Mumbai and Delhi are now home to some of the world’s most expensive private residences, and EUR 250,000-500,000 buys you fewer square meters than you might think in these megacities. Athens, Porto, or Antalya, are cheap by comparison. The Indian experience, in this sense, largely mirrors that of residents of Shanghai or Beijing.

The Indian passport leaves much to be desired in terms of mobility; the latest Henley Passport Index shows only 58 destinations – most of them in Africa – are available without a pre-arranged visa. Increasingly, Indians are turning to European residence programs, particularly those of Greece and Portugal, to obtain ease of access to dozens of desirable destinations.

The US, Canada, UK, and Australia – the top immigration picks of Indian HNWIS – all offer established residence-by-investment programs, but to eventually be naturalized as a citizen there entails a discretionary process that can sometimes take up to ten years and include extended physical presence and language requirements. Indian families looking for a direct path to citizenship are not enthused by the prospective wait-times. CIPs in Malta and Cyprus have seen their Indian clientele swell as a result

Demand for the US EB-5 program, meanwhile, is cooling somewhat due to recently raised investment requirements and exacerbated retrogression for Indian applicants. Many wealthy Indian families are now, perhaps belatedly, beginning to realize the wider tax implications of becoming green card holders.

While debate on the matter is rife and change is in the cards, official Indian government policy on dual citizenship remains, for the time being, one of non-acknowledgment. The acquisition of a new citizenship mandates a renunciation of the Indian one, an obstacle that dampens demand for citizenship by investment.

Should the authorities change their stance on dual citizenship, demand for CBI programs are certain to spike. It would also bring immense socio-economic benefits to the country, allowing the ultra-wealthy to maintain ties with the country while retaining the flexibility to be global citizens and do business in any country of their choosing.

Indian HNWIs of the 21st century have demonstrated an appetite for and willingness to emigrate and invest abroad. Low levels of social trust, legal and regulatory barriers, and bottlenecks among the most favored programs have suppressed the outflow of Indian HNWIs. As familiarity with professional advisories grow, rules loosen, and alternative destinations grow in acceptance, expect the Indian investment migration market to come roaring into the 2020s.