The last two years have turned the world upside down. And we’re not done yet, according to Ahmet Şener.

Globally, people from all walks of life are digging deep into their pockets of motivation, hoping that this is the “final push” for the pandemic. The end, however, keeps evading us with new variants and new measures to “control” the pandemic that keep driving up the cost of our well-being.

While working with the affluent worldwide, I always pick up “chatter” on how the investment world is shaping up for the next quarter. Here are some of the issues keeping global investors up at night for 2022:

In Turkey in the ’90s, we used to call hyperinflation “The Inflation Monster”. Financially conscious from an early age, I grew up being afraid not of the monsters under my bed but the monster in my family’s bank account.

That monster is now a global phenomenon. For the first time in decades, we had “sightings” of the abomination even in the US and the Eurozone, where inflation has clocked in at 6.8% and 4.9%, respectively.

For investors from the developing world, who still make up the lion’s share of the investment migration market, the currency risk will remain high, and they will have to work overtime to stay ahead while investing domestically.

Now, more than ever, investing is crucial. The cash on your bank account is losing its purchasing power by the day (in some places, by the hour). Moreover, many investors have lost their perception of how much an investment is worth and perceive bargains as “overinflated prices”. Yes, there will be real bargains when the eventual downturn begins but, now, if you stay put in low-yield accounts, you’ll have considerably lower purchasing power when the time comes to pick up bargains.

But investing, and investing judiciously, is not in itself enough. You must now also globally diversify your investments to provide the safety net you need to manage local shocks.

Citizenship and residency programs in the crosshairs

I will tear off the band-aid on this subject: no investment migration program will become easier to qualify for in the near future. When advising clients, I always assume right now is as good as it gets concerning any given program. As you know, the Portuguese program underwent a major overhaul, taking some of the most attractive residential real estate investments off the golden visa table.

Unfortunately, it won’t stop at that, as local and regional headwinds put the European programs under stress.

By now, we know the EU isn’t a friend of investment migration programs. While they have consistently failed to substantiate why the programs are “corrupt” or more harmful than other immigration venues into the EU, their stance will not change. We expect increased regulation involving the programs in the coming years, and participating in them will become harder and more expensive in the future, not easier.

There’s also talk of change in the Turkish Citizenship by Investment Program, which now costs US$ 250,000. There are almost no government fees. The proposed changes (not public yet) are either going to increase the minimum investment, increase processing fees, or will include a donation to the National Wealth Fund. Or, possibly, all of the above.

Finally, the peaceful countries in the Caribbean will also feel some pressure. The European Commission are openly complaining that “they are using Schengen zone access as a marketing tool.” The Commission is not wrong about that. It would be unfortunate to see these countries get their Schengen access canceled.

All in all, I remain adamant that there will not be a better time to acquire second citizenship or a European residence than right now.

For a while now, we have seen increasing global risk scores in multiple regions. It looks as though the moment the pandemic is over, we will have even bigger issues to worry about. Armed forces worldwide seem to be preparing to “fight something.” There is no shortage of problems to pick from these days, but I want to touch upon the three most pressing ones that I would personally hedge against.

A third round of COVID

The pandemic is no longer a health issue at this point. While governments try to plug holes in public health systems, there is growing sentiment among thinking individuals that governments are using the pandemic as an excuse to oppress the public. If Omicron is branded as a mild variant and if it becomes dominant, there is no stopping public outcry in the form of riots, strikes, and civil disobedience. However, the governments will be hard-pressed to address the strain on public health resources even a mild variant that is hyper-contagious would bring. My stance on the subject from Day One was that if there isn’t a widely accessible general use antiviral drug against Coronavirus strains, the pandemic will continue to be an issue for years to come. With re-infections and long Covid as prevalent as they are, there is simply no other way out.

This one is also related to the pandemic. We’re seeing global droughts and floods (go figure), rising prices of food, energy, fertilizers, shipping, microchips – you name it, the list goes on forever. The final word is that food insecurity will increase considerably. I am increasingly concerned about the subject because there is no more potent driver of crime and criminal behavior than a lack of access to food. As Henry Lewis said in 1906, there are only nine meals between mankind and anarchy.

Countries already dealing with high crime risks (Brazil, South Africa, and India, to name a few) may soon enter crisis if they do not address this issue by whatever means necessary.

Russia, China, and waning Western willingness to take the lead

This is the part I hate the most. Being in the business of risk management for individuals, there is no way I can avoid the subject, and there is no way to be gentle about it. Trouble is brewing, and it’s unlike anything we have seen in our lifetimes. As Russia pushes the EU around by waving the energy dependency card around and annexing regions left and right on the borders of the Union, there is no coherent strategy to contain them. The increasingly powerful and assertive Russia shrug off any verbal resistance, knowing full well they need to stay moving to avoid crumbling under their own economic woes.

Moreover, an increasingly idolized Xi in China has managed to weather the brunt of the damage dealt by the US trade war and is now able to strike back. And strike back he will. With Chinese soft power and financial patronage plugging the holes left by an increasingly weak US foreign policy in Pakistan, Afghanistan, and even Turkey, they are making gains now more than ever.

Unfortunately, as the Chinese policies are paying off, we risk facing an increasingly belligerent USA, which is the last thing we need in the world right now. In contrast to the consolidated and monolithic leadership in Russia and China, the increasingly isolationist UK and US have leaders that can’t even garner the approval of their own populations, much less what’s needed to take on a global leadership role.

Crises have opportunities baked into them

I know that my forecast for 2022 is not what you wanted to hear. Nevertheless, I want to wrap up by reminding each of you that your life will go forward in the tempo you decide. Fortunes have been made during wars, careers have shined through economic downturns, and some lives have even flourished through poverty and sickness. It is your decision alone that will determine where you end up when 2022 is over. My all-time favorite author, a true madman and genius, Terry Pratchett (RIP), wrapped up all my thoughts in a single sentence:

“If you don’t turn your life into a story, you just become a part of someone else’s story.”

So don’t lose hope; go out there and build, invest, network, and tell a story. Wealth and fortune will follow. 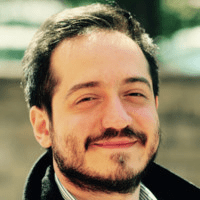 Ahmet Sener is the Managing Partner of Smart Citizenship.