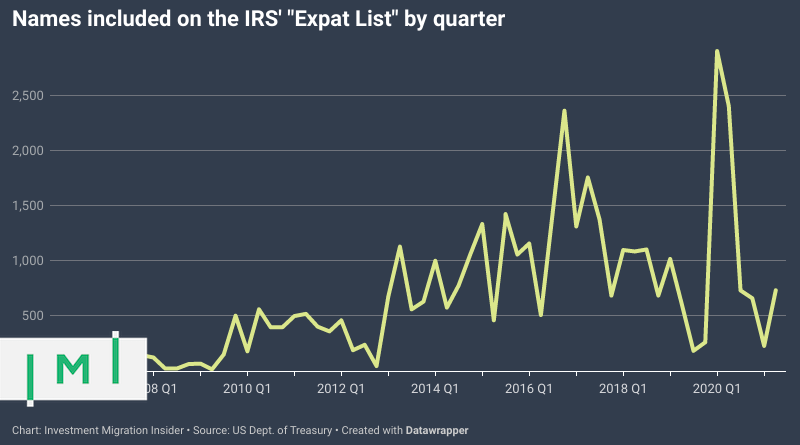 In its Quarterly Publication of Individuals Who Have Chosen to Expatriate for Q2 2021 published last week, the US Internal Revenue Service (IRS) lists 733 names of covered expatriates who have successfully renounced their US citizenships.

While the 733 published expatriations represent a sharp acceleration on the quarter (up from 228 in Q1, 2021), they remain low compared to the figures published in 2020, a year during which the Expat List contained 6,705 names. Note that the time it takes from when an expatriation actually occurs and until it is published on the List is between 18 and 24 months. The 733 expatriations reported for Q2, 2021, therefore, really stem from the Q2 2019 – Q4 2019 period.

Over the next several quarters, notes David Lesperance in a press release, we can expect quarterly figures to "drop off a cliff." This is not because fewer Americans wish to renounce their citizenships; rather, it's because they were effectively barred from doing so because US missions abroad began suspending routine services in Q1 2020.

In his May 2021 article, Under Cover of COVID, The US Is Preventing Citizens from Renouncing – On Purpose, Lesperance explained what's taken place at American consulates and embassies worldwide since the onset of the pandemic:

Since the start of COVID in March 2020, the US State Department has opted to shut down nearly all consular services, including renunciation appointments, at US missions all over the globe. This is the case even for places where COVID is well under control or that were never in lockdown.

While other countries continue to offer consular services to their citizens, US Missions (i.e. embassies and consulates) have canceled or severely restricted all consular services to US citizens – passports, registration of foreign-born children, and renunciation appointments. As the New York Times recently reported, this has caused tremendous hardship.

While many of these services are conducted on a mail-in basis in the US and could easily be done the same way abroad, renunciation requires the swearing in front of a consular officer. However, the officer stands behind a three-inch-thick glass wall. With basic precautions, there is no danger.

There is no conceivable reason that US consular services, including renunciation, cannot continue with basic precautions. Such services are some of the most important rights of a US citizen, and they have been halted for over one year. To add insult to injury, the official statement received from most US missions is “we do not know when the consular services will be possible again.” No additional information provided.

Lesperance says the US government is purposely attempting to stem the flow of expatriations, noting the barriers it has raised to that end:

"They have raised the fee from $0 a few years ago to $2350 today; Even prior to the pandemic there was an arbitrary wait-list of many months for
renunciation appointments; Even as pandemic lockdowns have eased in many countries, most Missions continue to slow-walk or even cancel completely the granting of appointments for renunciation and other consular services."

Because the list includes only the names of so-called "covered expatriates" (those with a net worth exceeding US$2 million or who have average annual tax payments over the last five years exceeding US$171,000), the true extent of the expatriation trend remains unknown. Lesperance believes the figures are severely and deliberately underreported:

"The US Government is not sharing data on numbers for the vast majority of renouncing Americans who are not covered expatriates. […] There are real reasons to believe that the government is underreporting the number of renunciations, to avoid making waves in the media and encouraging more citizens to renounce."

Lesperance explains he has waited four and a half years for a response to his Freedom of Information request for the actual numbers of renunciations.