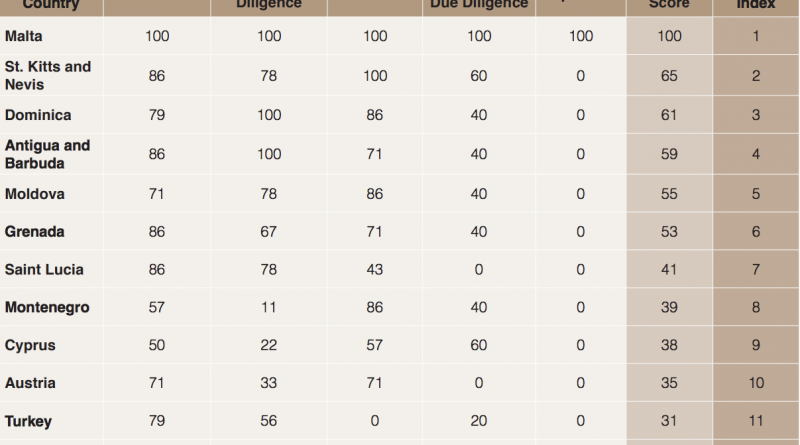 The residence and citizenship by investment industry has never been short on indices. At last count, there are at least eight passport/citizenship rankings and another three that rate CBI programs.

Although all three CBI indices include due diligence as a component in their ranking of programs, the DD score at which they arrived for each CIP is rarely discussed at length. Last week, Chetcuti Cauchi Advocates, an international law firm that specializes in investment migration, published what appears to be the first index devoted exclusively to measuring the rigor of the due diligence process of CIPs.

“The CIP DD Index is based on the measurement of 38 criteria grouped into our 5 Pillars namely: Identification, Financial Due Diligence, Clearances, Enhanced Due Diligence and Reputation,” explains Victor Zammit, Senior Manager for Reaserch and Development at Chetcuti Cauchi.

The index grants points to a program based on how many of the criteria in each pillar it meets, whereupon the data is normalized to produce composite scores for each pillar. This, emphasizes Zammit, avoids the arbitrary weighting of any one pillar.

See also: The Limitations of Automated Due Diligence for CBI-Applicants, by Burke Files

“Taking the example of Antigua, for instance, the 86 is the normalized score after allocating the points for the Identification Pillar to Antigua,” Zammit elaborates. “The point of normalizing is to give equal weights to Chetcuti Cauchi’s 5 Pillars CIP Due Diligence and be more objective in our analysis. For example, the Identification Pillar (with 14 criteria) would hold more influence in the final ranking over say, the Enhanced Due Diligence Pillar which is comprised of 5 criteria.”

In conjunction with the Index, the company is also proposing an “industry-wide due diligence framework” that it hopes will serve as a guide to best practices and counter the concerns about vetting practices expressed in the European Parliament and the OECD.

“A programme is granted points depending on how many of the criteria are satisfied in each Pillar. The data is then normalised to produce the scores for each Pillar. In so doing, we do not grant arbitrary weighting to any one Pillar of CIP Due Diligence over others. Each CIP Programme is then ranked according to the overall score,” writes the company in its introduction to the methodology.

Chetcuti Cauchi is not the first firm to propose an industry-wide due diligence framework in response to political concerns about investment migration vetting practices. Earlier this month, Civiquo – an online, price-transparent market place for investment migration service providers – proposed a “standardized, open-source, 8-step risk assessment framework to allow anyone to reliably identify the relative risk of taking on an applicant”. See: Improving Applicant Approval Rates With a Standardized DD Framework

The index uses Malta’s Individual Investor Program, whose due diligence procedures are widely considered to be the industry benchmark – as a basis for evaluating other programs, giving it a score of 100 on each pillar and the top spot in the ranking.

To read more about the methodology of, rationale for, and thinking behind the CIP Due Diligence Index, see the full report here.