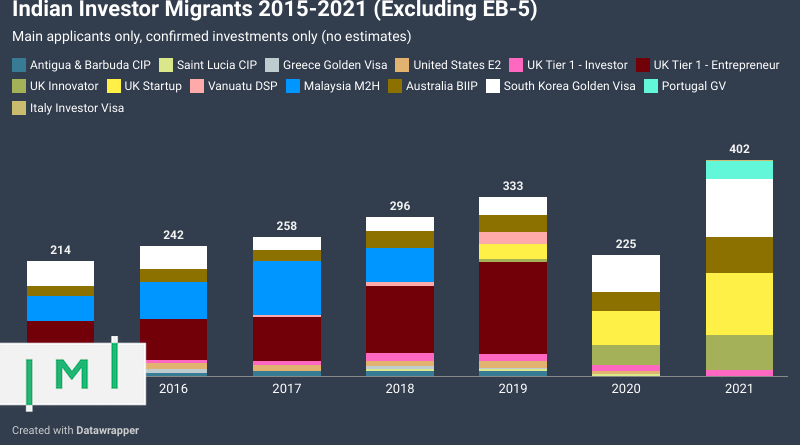 A review of the most recent data on investor migrant from India shows the continued concentration of interest in Anglosphere countries and, surprisingly, South Korea.

That should not be taken to imply that Indian participation in investment migration is declining, for the following reasons:

We must emphasize that the data obtained is partial and incomplete and should, as a consequence, be considered merely indicative rather than absolute.

Among the programs for which data are available, the UK Startup visa recorded the highest number of approved Indian main applicants in 2021 (115), closely followed by the South Korean golden visa (108). Prior to its closure in 2019, Indians dominated the UK's Entrepreneur visa category. Much of this demand appears to be shifting toward the Startup and Innovator programs that replaced it.

Indian participation in Australia's BIIP nearly doubled in 2021, although this has less to do with an Indian change in demand for the program than with the program's near-doubling of its annual quota in 2021.

The impact of the EB-5 program's turbulent 2020 and 2021 - a period that saw the minimum investment amounts change a number of times as well as a year-long lapse of the regional center program - becomes more readily apparent when this particular program is stripped away from the comparison:

Excluding the EB-5 program, the number of confirmed Indian investor migrants nearly doubled between 2020 and 2021. And that is before full-year 2021 figures have even been published for half the programs in this comparison.