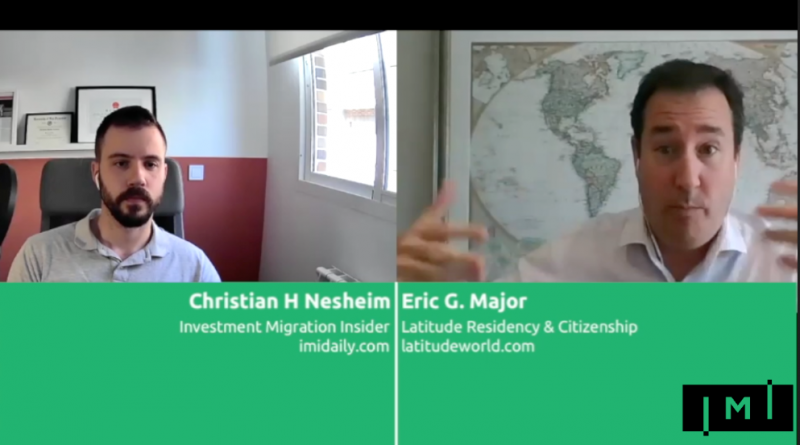 This video is the second in an IMI Club exclusive series of interviews with investment migration personalities, centered on questions surrounding the direction the market will take following COVID-19. To see Episode 1, with Andrew Henderson of Nomad Capitalist, click here.

Many industry observers have hypothesized that the residence programs of western countries that give access to larger territories and consumer markets – such as those of the US, UK, Canada, and the EU – will be the ultimate winners after the pandemic. Major, to a significant extent, shares that view.

“The Grade A nations are back, with their residency programs […] There are two dynamics: The clients are looking at the bigger markets and jurisdictions, favoring places where there’s rule of law and, frankly, where English predominates, where there’s healthcare and social systems. The conversations we have with clients are very much centered around ‘where do I want to be the next time something like this happens?'”

But will the economic difficulties caused by the pandemic, particularly those of the sovereign debt variety, galvanize more countries to open up their own programs in a bid to raise FDI, as has happened on similar occasions in the past?

“For sure,” says Major. “Absolutely. And whereas there’s always a contingent within any government that may not see what we see and like what we like, the reality of finance and economics kicking in will make this a reality. Even a country like Canada, [where they’ve suspended the QIIP]. Rest assured, [after COVID-19] they’re going to look at this again. The impact of COVID […] it’s big! It’s way bigger than 2008, it’s way bigger than anything in my lifetime. Make no mistake about it; the mass affluent have been devastated by this.”

That, he explains, will drive a slowdown in demand for the six-figure, middle-tier programs over the next few years which, in turn, will be exacerbated by the entrance of new, competing programs opening up in response to the pandemic-driven slump.

“The fiscal and social hardships this brings will lead to social unrest in many countries, both in emerging markets and Western nations.”

That dynamic, says Major, will make the larger, more advanced regions relatively more attractive thanks to the market access and social safety nets they offer. These countries, traditionally, have favored physical immigrants rather than “paper-immigrants”, and the renewed interest in these jurisdictions will allow them to persuade greater shares of their potential new residents and citizens to physically relocate rather than merely obtaining their travel documents for the sake of mobility alone. Major, therefore, has a bullish outlook for the entrepreneur/startup visas of the US, the UK, Canada, and even Portugal.

The direction in which the winds are now blowing, he indicates, means more immigrants will actually be “prepared to do the time”.

In the full interview, Major also comments on the reasons he believes the Montenegro CIP has underperformed so far (as of last week, only ten passports had been issued, according to Prime Minister Marković.

Questioned as to whether he believes demand for investment migration programs will ultimately soar once the dust has settled from the pandemic, Major’s conclusion is unequivocal.

“No doubt. 100%. After 25 years in the business, whether it’s North Korea rattling South Korea’s chain, whether it’s the handover of Hong Kong in ’97 […] or what’s happening right now in Hong Kong, whether it’s the Arab Spring. […] Fortunately, the phone rings for all of us when there’s chaos and turmoil happening.”

Speaking of the flurry of immigration-inquiries in Hong Kong following Beijing’s announcement of a national security law, Major thinks that – this time – it’s not merely a question of a flash-in-the-pan, temporary surge in panic-inquiries, but something far more substantial.

“This time it’s real. What we’re seeing now is equivalent to what we saw in ’97,” he points out and – in the interview – goes into great detail as to why he thinks recent events in Hong Kong will make it an investment migration hotspot over the next several years. He also indicates he believes the UK made a wise decision in offering an eased path to citizenship for holders of British Nationals Overseas passports. “We saw in Canada what great immigrants Hongkongers are. It’s a great, productive type of migration. They’ve been westernized and have a foot in each canoe, as they say. I think it’s a very smart move on the part of Boris Johnson.”

Asked what course of action remains open to smaller CIP countries whose public revenue flows chiefly from tourism and citizenship by investment now that the influx of travellers is poised to slow markedly, Major thinks they’ve got a tough time ahead and not much of a margin to reduce prices.

“The Caribbean is in a precarious place right now. I think none of them want to break that $100,000 threshold. […] Because then there’s just not enough money in it for all the stakeholders, including the countries themselves, and this race to the bottom has to have some kind of a floor.”

Not that he doesn’t think there aren’t ways out of the woods even for those programs, several of which he brings up during the call, which IMI Club Members can view here.