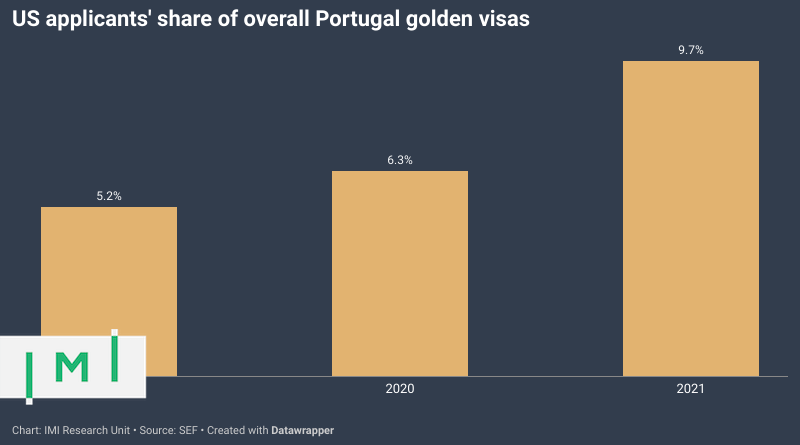 87 main applicants and 104 of their family members received golden visas in Portugal during the month of October, SEF figures published this week reveal. Total investment in the program during the same period reached EUR 46.6 million, a 53% improvement on September and the best monthly result since April.

Having approved its 10,000th golden visa application in September, the program reached a number of milestones also in October:

The average family size for approved applications has fallen by some 20% since its 2017 peak of 2.98. The drop has been particularly steep this year. One possible explanation is that the age profile of applicants may be changing. It may be that the average golden visa investor is getting younger (the younger you are, the fewer children you are likely to have) or getting older (the older you get, the greater the likelihood your children are no longer dependent on you).

Another possibility is that share of applicants from countries with smaller families is increasing (Russian women give birth to 1.5 children, on average) relative to those from applicants with large families (Pakistan, 3.5 children per woman).

American interest in the program continues unabated. In October, fully 14 out of 87 main applicants were American. That number was narrowly surpassed only by China, which accounted for 15 main applicants. All told, 68 American main applicants have been approved this year, and make up nearly 10% of all golden visa investors in 2021 so far.

Americans have now featured in the Top 5 nationalities for 15 out of the last 16 months and - barring a drastic trend-change in the last two months of the year - will be the second-largest applicant group for the program in 2021 overall.

The remaining top 5 applicant nationalities this month were Indians (8), Russians (8), and South Africans (4).

The Investment Funds category (Subp. 7) has now raised more than EUR 20 million in 2021, a figure that is on track to end the year some 40% higher than the same in 2020. In relative terms, the rise of the fund option is even more pronounced; the share of applicants who opt for this route has doubled, from four to eight percent, since last year.

The share of applicants who pick "alternative assets" (anything except the EUR 500,000 real estate investment) generally has also risen to a record 37% in 2021.