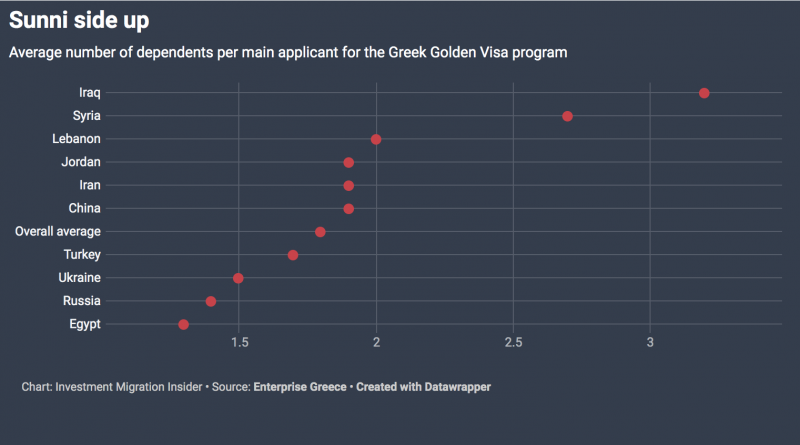 Recent figures from Enterprise Greece reveal that, in the first half of 2019, the Greek Golden Visa approved 645 main applicants and 2,042 dependents. On an annualized basis, this equates to an 8% drop in main applicant approvals, but a 35% increase when including dependents, indicating that average family size is growing prodigiously.

Overall, since the start in 2013, 4,537 main applicants and 8,774 of their family members have received golden visas in Greece.

The Chinese share of total applicants continues its rapid ascent; while fewer than a third of investors in 2017 were Chinese, that proportion has now risen to 61%, up from 58% in Q1.

Some eight of ten golden visa property investments took place in the capital region, which is to say the three municipalities of Athens, Piraeus, and Pallini, a distribution that’s remained stable over the last several years.

Investors of different nationalities display significant variance in their tendency to include family members in their applications; while Egyptian main applicants appended, on average, only 1.3 dependents, their neighbors to the Northeast – Iraqis and Syrians – represent clear outliers by bringing with them more 3.2 and 2.7 family members.