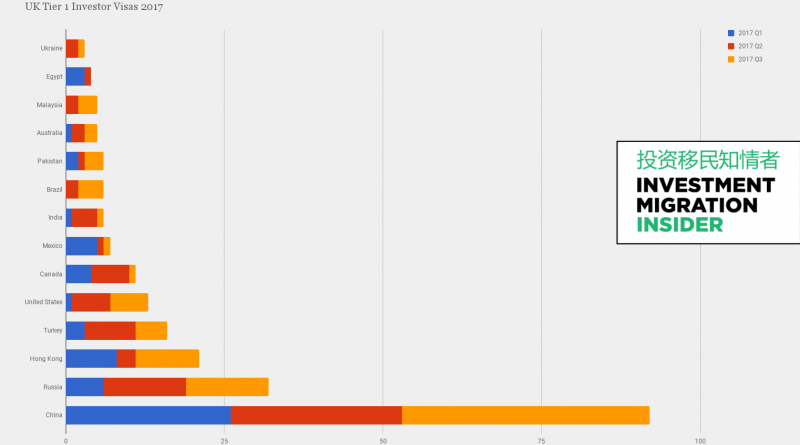 According to figures released today by the Office for National Statistics, the UK Home Office has granted 114 Tier 1 Investor Visas in the third quarter of this year, up from 85 in Q2, an increase of 34% on the quarter and up 247% since the same period last year.

With another quarter still remaining, the Home Office has this year already granted more Tier 1 Investor Visas than all of last year combined; 274 so far in 2017 as compared to 215 in all of 2016, a 27% lead on last year with another victory lap to go.

Accounting for more than a third of Investor Visas issued both in Q3 and during 2017 as a whole (nearly half if you include Hong Kong), Chinese investors remain head and shoulders above the rest.

The Entrepreneur category, the popularity of which fell steadily between 2013 and 2016, appears to be stabilizing in 2017; The number of Entrepreneur Visas issued has been essentially the same during the first three quarters of 2017, amounting to 227, 222, and 229, respectively.

Farzin Yazdi, Head of Shard Capital Investor Visa, who commented three months ago that he expected Tier 1 Investor Visas to reach the 100 per quarter level, says the quarterly numbers have exceeded his expectations, and that the data reveal the UK remain

“Despite Brexit, the UK remains a top destination with Chinese, Russia, and the CIS dominating the countries of origin,” said Yazdi, and also pointed out that many Tier 1 investors are now approaching a critical stage in their journey to Indefinite Leave to Remain.

“We are approaching the time when the “old rule” visas are coming to the extension stage.  A number of applicants have either not made a qualifying investment or may not be able to evidence their investments and thus may fall afoul of the rules.  We urge applicants to be vigilant and do their research when choosing their investment provider, and to engage their immigration lawyer,” urged Yazdi.