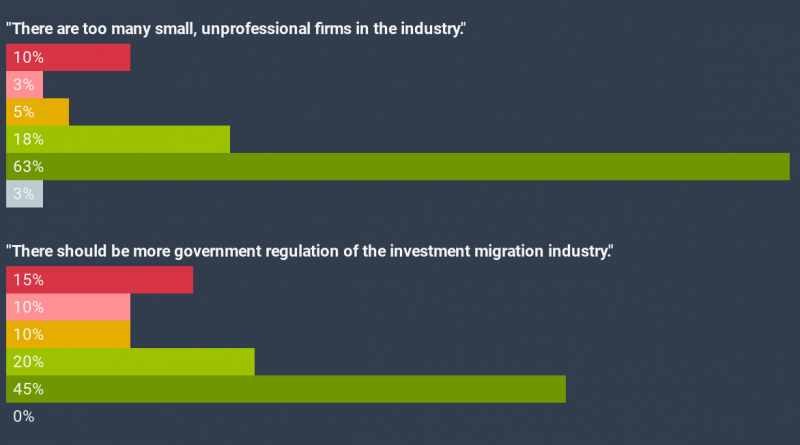 Executives disagreed on the proper price for Caribbean CIPs and the merits of unification, while most hoped for governments to tackle a glut of amateurs.

In this second report (see the first here) on results from our 2019 Investment Migration Executive Survey, we focus on the sentiments expressed by the top executives of 40 international investment migration firms. To see how we define “international IM firms” and to learn about the survey methodology, read our introduction in the first article on the topic.

Respondents were asked to indicate the extent to which they agreed with the following five statements:

“The average minimum investment requirement of residence by investment programs in EU-countries will be lower in five years than it is today.”

Predictions were divided as to future price trends among EU residence by investment programs; while 53% predicted lower average minimums five years hence, 30% took the opposite stance. Nearly a fifth expressed no view on the question.

“The minimum investment requirements in most Caribbean CIPs are too low.”

Opinions similarly diverged on the question of minimum investment requirements in the Caribbean. A point of contention among industry stakeholders for the last three years, a series of price reductions among the region’s CIPs – the “race to the bottom” – has given rise to heated debates among both the countries themselves and the companies that serve them.

Fully 30% strongly agreed that minimums – now hovering around US$100,000 for a single applicant in most Caribbean CIPs – were too low, while another 13% somewhat agreed. 15%, however, strongly disagreed, while 20% somewhat disagreed.

“Caribbean citizenship by investment programs should unify and become a single program.”

Proposals to unify and harmonize the Caribbean programs have surfaced at regular intervals during the same period, often coinciding with – and suggested as a solution to – the “price war” question.

53% of respondents disagreed (30% fervently so) that programs should unify, indicating they don’t consider rallying behind a single banner a viable solution to preventing further discounting.

About a third of respondents, however, indicated they would favor the idea.

“There are too many small, unprofessional firms in the industry.“

Respondents indicated uniformly and unequivocally that they considered the presence of too many small and unprofessional firms a problem for the industry. More than four-fifths said they either strongly or somewhat agreed with the statement, while only 13% disagreed.

See also: Most Investment Migration Firms Have Fewer Than 10 Employees

“There should be more government regulation of the investment migration industry.”

While respondents concurred broadly that an excess of amateurs represented a predicament, the consensus on whether resolving the matter was a job for governments was not equally resolute.

65% of respondents indicated they agreed, somewhat or strongly, that governments should play a bigger role in regulating the investment migration industry. A quarter disagreed with the notion, while one in ten expressed no opinion on the matter.