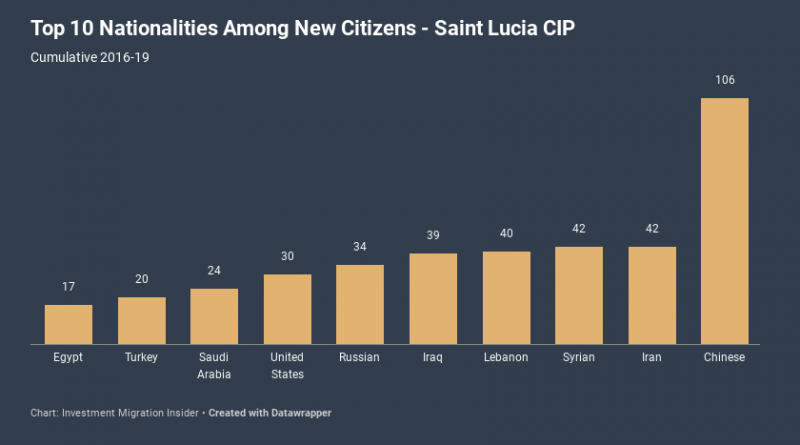 The Saint Lucia Citizenship by Investment Program – the Caribbean’s youngest – raised some EC$62 million in the 2018-19 reporting year, more than double the EC$28 million it garnered the year before.

In all, the Saint Lucia Citizenship by Investment Unit (CIU) approved 210 applications, 22 more than during the preceding year, which resulted in 288 new citizens, a slight increase on the 282 seen in 2017-18. For the second year running, China was the leading source-country for new citizens, accounting for 21% of the total, followed by Russians (9%), and Syrians (8%).

On a cumulative basis, China is now the clear leader among CIP participant countries, accounting for 106 citizens, more than double the next source-countries on the list, Iran and Syria, each of which has seen 42 of their nationals take up citizenship in Saint Lucia.

“The Caribbean CIP market is very price-sensitive,” Nestor Alfred, head of the Saint Lucia CIU, tells IMI in response to questions as to why application volumes have not grown as rapidly under his program as among some of his rivals, whose price levels – especially for families – are lower than those of Saint Lucia.

“Saint Lucia simply can’t compete on price with some of the other islands right now. And applicants are making decisions primarily based on the price at the moment,” says Mr. Alfred, noting that Saint Lucia must become better at clarifying to potential applicants the distinguishing advantages Saint Lucia has that are not directly related to citizenship, such as its comparatively well-developed financial services sector.

“While we first floated the idea of a tax residency program in 2017, the EU and the OECD had some concerns which prompted us to delay those plans in order to re-think our approach. But I think we can expect, within a few months’ time, plans along those lines to resurface, but in a better way.”

The CIU-boss also reveals that a new approved real estate project – Saint Lucia has only one of those, for the moment – is currently under evaluation.

“A rather exciting project is now being reviewed, and within the coming weeks, we’ll be making a decision,” he says, but is reluctant to disclose further details.

Want to know more about the Saint Lucia CIP? To see recent articles, statistics, official links, and more, visit its Program Page. To see which firms can assist with applications to the program, visit the Residence & Citizenship by Investment Company Directory.