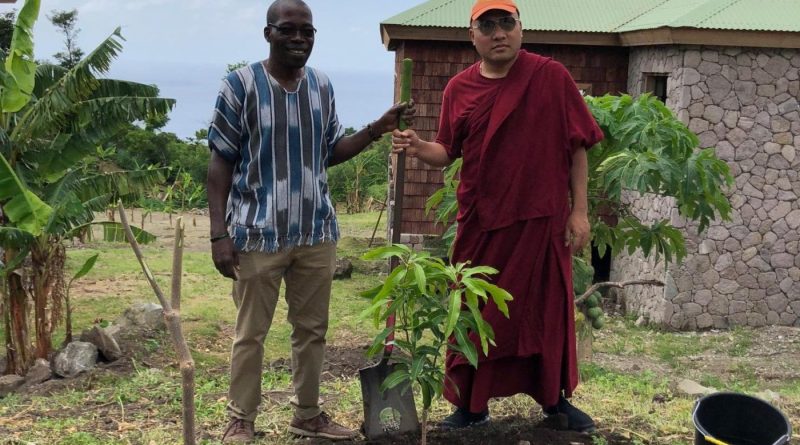 Ogyen Trinley Dorje, one of two claimants to the title Karmapa Lama and tipped by leading to be among the most likely candidate to be the next Dalai Lama, has obtained a citizenship in Dominica through investment in Jungle Bay.

A press release from Jungle Bay developer Sam Raphael indicated the process had been lengthy and fraught with obstacles. The press release is reprinted in full below.

His Holiness Ogyen Trinley Dorje, 17th reincarnation of the Karmapa Lama, recently obtained Dominica citizenship through the Citizenship by Investment Program. The Karmapa, who heads the largest Buddhist denomination (lineage), is largely regarded by the international Buddhist community as second to the Dalai Lama.

The Karmapa’s followers recently facilitated His Holiness’ Commonwealth of Dominica citizenship through investment in the new Jungle Bay Resort allowing him the freedom to travel globally to over 120 countries without restriction. The Karmapa made his first visit to Dominica last month where he met with officials and planted a mango tree at the new Jungle Bay Resort. The tree planting was symbolic in establishing a living connection to his island of nationality. Planting a tree also aligns with the intention of the Government of Dominica to make the island nation the first climate resilient country in the world.

The Karmapa’s life journey and decision to seek Dominica citizenship is an interesting and compelling personal story. Ogyen Trinley Dorje was recognized as the 17th reincarnation of the Karmapa at the age of seven after a search party of Buddhist monks identified him in a nomadic village in the Tibet Autonomous Region. In an effort to maintain control of the people of Tibet the Chinese Government kept the young Karmapa isolated in a monastery until he reached the age of when a few trusted advisors helped the Karmapa to flee to India in a daring 10-day escape through the Himalayas.

This epic journey was later made into a movie Never Give Up.  Upon arriving in India, the Karmapa was again subjected to isolation in a monastery and extreme travel restrictions because of the Indian Government’s desire to extend their influence in the Tibetan region and among the international Buddhist community.

The Indian Government marginally relaxed the Karmapa’s ability to travel abroad after President Modi took office in 2014, however his movements were still severely restricted.

Approximately one year ago the National Security Council of India authorized the Karmapa to take a short trip abroad. During that he decided to obtain Dominican citizenship so he could travel freely and promote his message of peace and living in harmony with the planet.

A man who since the age of 14 has seen his personal liberty severely restricted by the governments of both India and China has now found freedom through a citizenship by investment program in the Caribbean.