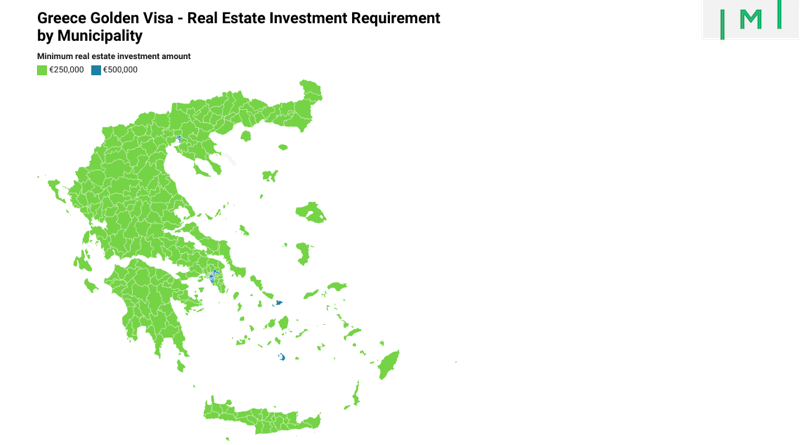 It’s been three months since Greek Prime Minister Kyriakos Mitsotakis announced that the minimum investment amount for the golden visa’s property investment options would rise from EUR 250,000 to EUR 500,000. Two weeks later, however, Alexander Varnavas of Varnavas Law was able to reveal that, according to the Ministry of Development, the heightened minimum would apply only to certain municipalities and that, moreover, the government would instate a transition period.

This week, we learn the details of the municipalities affected, as well as the precise duration of the transition period:

Sources within the Ministry of Development, Varnavas tells IMI, are now indicating the transition period will begin on May 1st next year and last until the end of 2023:

“Investors buying in the areas affected and who have already paid a 10% of the property value as a deposit by April 31st, 2023, will be able to conclude their property contracts up to December 31st, 2023, and still apply under the old EUR 250,000 scheme,” comments Varnavas.

Moreover, he points out, in cases where such deals fall through, investors who have already paid their deposit will have the option to replace the initial property with another one and still apply under the EUR 250,000 threshold, provided they conclude the transaction before the end of the transition period.

The new rules will subject a total of 36 municipalities to the EUR 500,000 minimum investment requirement. 28 of these are in the Greater Athens region, six in Greater Thessaloniki, while the remaining two are the island municipalities of tourist hotspots Santorini and Mykonos.

List of municipalities where real estate investment minimums will rise to EUR 500,000 next year

Political observers expect Prime Minister Mitsotakis' New Democracy government, which holds an absolute majority of seats, to table the legislation to update the regulations in Parliament this week.