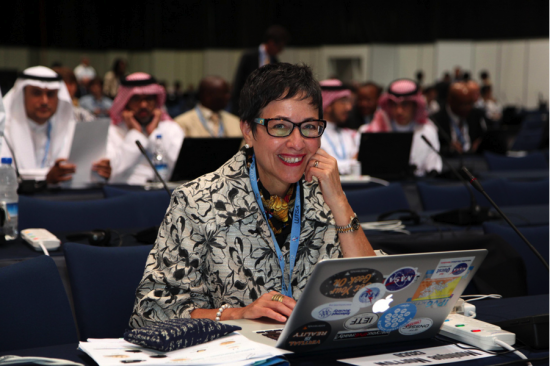 The Global Citizen Award® was granted to Morrow in recognition of her courageous efforts to revolutionize and mobilize technology for the purpose of advancing the human rights of the most marginalized people in the world.

The Humanized Internet project focuses on the 1.1 billion individuals (of which 230 million are children under the age of five) who are unable to prove their legal identity, often as a result of involuntary displacement or because they have not been registered by their governments. Without government-issued documentation, these individuals are ‘invisibilized’ and excluded from society and its institutions, which makes them especially vulnerable to human trafficking and abuse.

Morrow’s organization works tirelessly to empower these dispossessed groups with a virtual identity — a digital set of their marriage, birth, education, healthcare and other essential records — that they can access any time, through any mobile device. This ground-breaking approach shifts ownership of the identity process away from humanitarian organizations and other intermediaries and into the hands of the refugees or asylum-seekers themselves.

Armed with a virtual identity toolkit and platform, displaced people can receive coupons and funding directly and begin to move through the world with dignity and security, as fully fledged human beings. On the other side of the refugee spectrum, Morrow lobbies governments to rethink the sovereignty of paper over electronic forms of documentation and adapt their bureaucratic practices for the 21st century.

Throughout her career, Morrow has sought to build bridges between the tech world and the public sector, helping industry leaders align their existing and future technologies with the needs of governments, non-profits, and civil society organizations. She is widely recognized as one of the world’s most influential technology leaders.

The Global Citizen Award® is given each year to an inspiring individual who has made an extraordinary contribution to the global community.

“Monique Morrow’s remarkable work at the intersection of technology and human rights makes her an exceptionally worthy recipient of this year’s award,” says Paola de Leo, Head of Group Philanthropy at Henley & Partners. “The Humanized Internet is a demonstration of how the incredible advances and innovations in technology today can be used to improve the plight of the world’s most vulnerable people. Morrow is paving the way for more open and sustainable systems of governance and identity, and she deserves this year’s award unequivocally. Henley & Partners is committed to working with Morrow to promote the global cause of refugees, which has become the primary focus of our social investment.”

“In the end,” says Morrow, “building a humanized internet is about solving a billion-person problem. It touches not only on digital identity but also on privacy and security, gender equality, border, travel, and tax simplification, access to clean water, clean air, and healthcare, and access to capital, technology, and education. It is one of the most, if not themost, pressing issues of our time. I am thrilled to be the 2017 recipient of the Global Citizen Award®, which acknowledges the persistence of so many organizations and individuals in making the world a better place. The more we discover the world around us, the more porous the borders between us become.”

The Global Citizen Award® consists of a specially made commemorative medal, an award certificate signed by the president of the award committee, and a USD 50,000 monetary prize. USD 25,000 of the prize goes towards helping the awardee continue their excellent work, and an equal share goes towards supporting the longstanding partnership between Henley & Partners and the United Nations High Commissioner for Refugees (UNHCR).

Laureates are selected from a pool of nominees by an independent award committee made up of seven highly distinguished individuals, including Leigh Foster, Chief of Events, Campaigns and Goodwill Ambassadors at UNHCR, Professor Khalid Koser OBE, Vice-Chairman of the Advisory Council on Migration at the World Economic Forum, and Her Royal Highness Princess Firyal of Jordan.