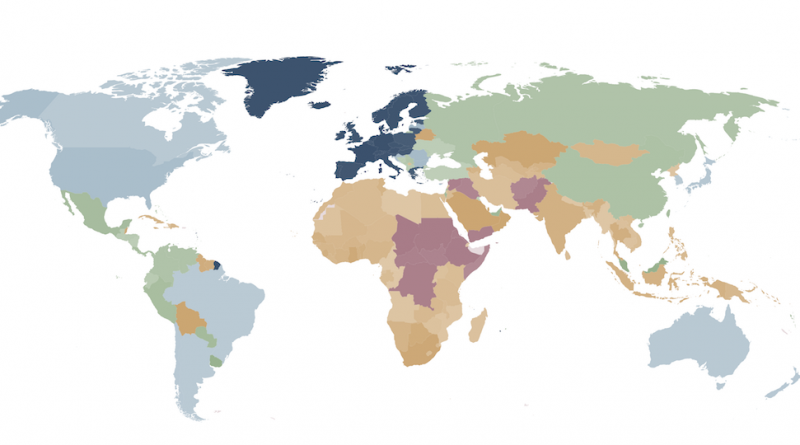 France’s quality of nationality is the best in the world, according to the 3rd edition of the Henley & Partners – Kochenov Quality of Nationality Index (QNI), which was launched in London today. The French nationality earned a score of 81.7% out of a possible 100%, fractionally ahead of Germany, which was knocked off the top spot for the first time in seven years, with a score of 81.6%. While the difference between France’s and Germany’s results is relatively small, France’s comparative advantage lies in its greater Settlement Freedom (attributable mainly to the country’s former colonial empire).

Iceland and Denmark take 3rd and 4th place, respectively, on this year’s Index, which is the only one of its kind that objectively measures and ranks all the world’s nationalities as legal statuses through which to develop your talents and business. The UK drops down a position to 13th place, again failing to secure a spot in the top 10, while the US increases its position by two ranks, claiming 27th place, with the country’s relatively poor standing on the Index primarily due to its low Settlement Freedom compared to EU member states. China climbs two places to rank 59th, and Russia maintains its position at 63rd place on the Index. This year, the UAE has for the first time ever overtaken Israel on the QNI, now ranking 46th, with Israel in 48th position. The Emirati nationality has climbed 13 positions over the past five years, making a significant leap forward when its holders received visa-free travel access to the Schengen Area in 2016.

Prof. Dr. Dimitry Kochenov, a leading constitutional and citizenship law professor and co-creator of the Index, says the key premise of the QNI is that it is possible to compare the relative worth of nationalities as opposed to simply that of states. “In today’s globalized world, the legal status of millions of nationals extends their opportunities and desires far beyond their countries of origin: the confines of the state are simply not the limit of their ambitions and expectations.Using a sophisticated combination of quantifiable data derived from leading international institutions and experts, including the United Nations, the World Bank, and the International Air Transport Association, the QNI measures the internal value of nationality, which refers to the quality of life and opportunities for personal growth within our country of origin, as well as the external value of nationality, which identifies the diversity and quality of opportunities that our nationality allows us to pursue outside our country of origin.”

According to Prof. Kochenov, the QNI’s combined methodology produces a clear and objective account of what our nationalities can do for us within the borders of our home country and of where they can take us abroad. The Index’s findings have important and far-reaching implications: “Firstly, the QNI proves that one cannot possibly be correct in stating that all nationalities and passports are equally good. Some nationalities are radically better than others: being born French gives one a huge advantage over the liability brought about by a Somalian nationality, for example. With the QNI, illustrating this discrepancy becomes simple.

“Secondly, the QNI proves that it is not true that the most prosperous and economically important countries endow their citizens with the best nationalities: while China is an economic giant, its nationality has a very modest objective value, and while Liechtenstein has a micro-economy compared to that of China, its nationality is world-leading. Some nationalities are great, while others are quite simply terrible. Now, we can see which is which.”

Brexit and the implications for UK and European nationality

The 3rd edition of the QNI continues to interrogate the quality of British nationality against the looming specter of Brexit. A ‘hard Brexit’ would see the UK losing its settlement and work rights in 30 of the world’s leading states, overwhelmingly impairing the quality of its nationality. But it could also increase tension and competition between the UK and the rest of Europe and potentially destabilize the nationalities of EU member states that had hitherto enjoyed close ties to the UK.

“The latest results from the QNI seem to anticipate this lose–lose scenario,” says Kochenov. “Both the value of European nationality overall and the value of UK nationality in particular are in gradual decline, especially in relation to faster-growing economies such as China, the UAE, and the US, whose nationalities continue to increase in value each year. Having said that, however, Europe remains the undisputed global leader in terms of nationality quality, and emerging economies would need an entire century of unchecked success to unseat it from this position. Accordingly, any loss will be felt much more acutely by an increasingly isolated Britain in the case of a hard Brexit.”

Notable movements on the QNI

Year-on-year, Georgia and Ukraine are the biggest climbers globally, rising 20 and 19 positions, respectively. The ascent of both nations can largely be attributed to the visa-waivers they signed with the Schengen Area in 2017, which significantly increased their Travel Freedom scores. On the other end of the spectrum, the Iraqi nationality fell 15 positions — one of the biggest declines on the QNI. The nationality fell in value after visa restrictions were introduced by a large number of countries.

Examining the results of the QNI over the past five years of measurement reveals some interesting shifts. Overall, Colombia has been the highest climber since 2013, rising 50 positions and improving its value by 14.6%. By contrast, the Qatari nationality has dropped massively as a result of regional diplomatic conflicts. In fact, despite a relatively strong starting point (56th place in 2013), the Qatari nationality has dropped more significantly over time than war-torn and unstable Libya, Syria, and Iraq. Its free-fall to 87th place in 2017 represents a 31-position decrease in total since 2013.

The broad spectrum of global nationality

Dr. Christian H. Kälin, co-creator of the QNI and Group Chairman of Henley & Partners, says the Index is highly relevant to individuals interested in understanding the circumstances associated with their nationality, as well as to governments looking to improve the local, regional, and global reach of the nationalities they provide.

“It is clear that our nationalities have a direct impact on our opportunities and on our freedom to travel, do business, and live longer, healthier, and more rewarding lives,” Kälin says. “The reality that the QNI describes is, in many respects, regrettable: in the majority of circumstances, our nationality plays an important role in establishing a highly irrational ceiling for our opportunities and aspirations. An exception to the rule is the expansive freedom of movement and settlement enjoyed by nationals of France, the Netherlands, and Finland, among others. These are the most globally integrated citizenships in the world, turning the national borders of roughly one quarter of the world’s states into myths for their holders and liberating their citizens from imaginary geographical limitations. For the many individuals who do not automatically enjoy such boundless levels of access and mobility, residence and citizenship programs provide an alternative path to freedom. The appeal of this option is growing each year.”

Kälin adds that governments are increasingly embracing residence- and citizenship-by-investment as a means of stimulating economic development and growth. In addition, more and more wealthy and talented individuals are seeking to diversify their citizenship portfolios to give themselves and their families greater international opportunity and security. “Alternative citizenship represents the most direct route to global mobility, connectivity, and access. The appeal of residence and citizenship programs is growing rapidly, with more than 60 different programs in 57 countries to choose from. The QNI is the most indispensable reference tool and resource when selecting the most valuable second or third nationality to acquire.”