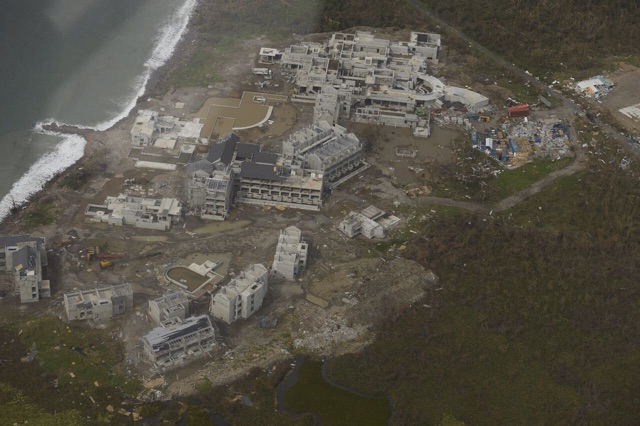 Despite the widespread devastation and a rising death toll left by Hurricane Maria in Dominica, Investment Migration Insider was yesterday pleased to report that the island’s CIU is now fully operational. Today, Range Developments, builder of the Cabrits Kempinski Resort near Portsmouth Dominica, reports that its construction activity has suffered minimal setbacks.

September 28, 2017 – The directors and staff of Range Developments wish to express their support and solidarity with the people of Dominica in the wake of Hurricane Maria. Its own development, the Cabrits Resort Kempinski Dominica, situated on the north shore of the island near Portsmouth and still under construction, stood firm as the hurricane passed through (see picture). Range Developments is committed to resuming work on the Cabrits Resort Kempinski imminently, as soon as the supply chains restart.

“The best thing we can do for Dominica is to begin construction as quickly as possible to ensure the wheels of the economy start turning through returning people work,” said Mr Mohammed Asaria, Vice Chairman of Range Developments. “We are committed to Dominica and categorically are not leaving. We have a hotel to complete and we will do so with our full commitment. Our responsibility is to our investors and equally to the people of Dominica to ensure sustainable job creation is maintained.”

Relief work for those areas less fortunate has already begun, with supplies being ferried in from neighbouring countries and those farther afield. Prime Minister Roosevelt Skerrit made a stirring speech at the United Nations General Assembly in New York and is galvanising the international aid effort. He was quick to publicise the island’s plight and his efforts to keep the disaster in the public eye are to be commended. He has described the clean-up as a “humungous challenge” but pledged that every village would soon be reached. Countries from across the globe have committed to assist Dominica and support is being extended to Dominica in its time of need.

Over the past few days, the efforts of the Government of Dominica must be applauded and recognised. The country has started on the long path to recovery. Essential utilities such as power, water and telecommunications are beginning to return to communities’ island wide. Roads are beginning to be cleared, while the airports are re-opening.

As the reconstruction of the island’s infrastructure gets underway, Range Developments has lent support to those who have been most affected near its development. It has already sent down a helicopter of urgent supplies, carrying essentials such as food, water, clothing and baby supplies, as well as, assisting with the transportation of relief from neighbouring St Lucia by boat.

Range Developments’ CSR team in the coming days will be identifying a number of long term initiatives to support in the Portsmouth area with a key focus on education and social welfare.”