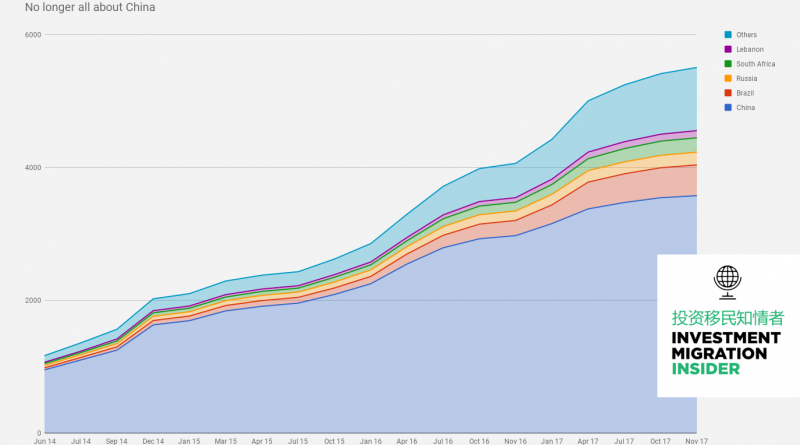 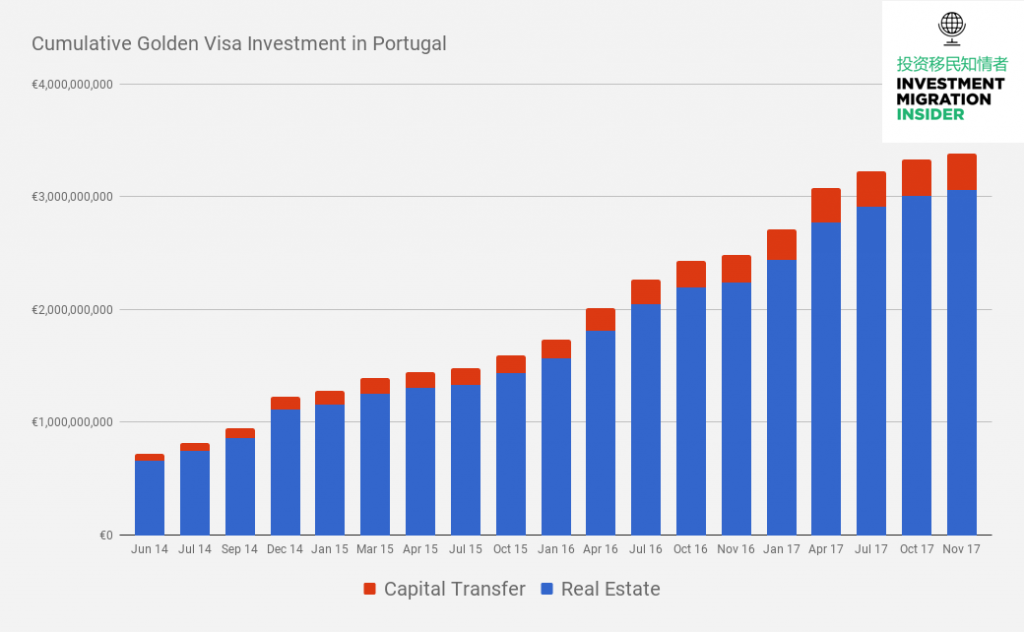 During November last year, 93 main applicants spent €55 million on golden visas in Portugal, show figures from Portugal’s Immigration and Borders Service. This compares favorably with the €48 million invested by 78 applicants during the same period in 2016.

The cumulative amount raised through Portugal’s Golden Visa program since inception in 2012 now stands at €3.4 billion, of which roughly 90% went into real estate investments. Altogether, 5,505 main applicants – 65% of whom have been Chinese nationals – have received an approval, and have brought with them an additional 9,212 dependents.

While the Chinese are still by far the largest contingent of Golden Visa investors in Portugal, their dominance of the program is rapidly fading: In November 2016, they made up 73% of total applicants up to that point and a year before that, 80%. But the most recent figures show that Chinese nationals made up only a third of applicants in November 2017. In fact, Chinese applications in November were actually down 35% year on year (31 versus 47 in November 2016).

What gives? According to our records, there is nothing to indicate that Chinese interest in investment migration as a whole is waning.

The relative decline in Chinese applications may have something to do with Portugal’s Golden Visa program taking on several new competitors in the last few years. 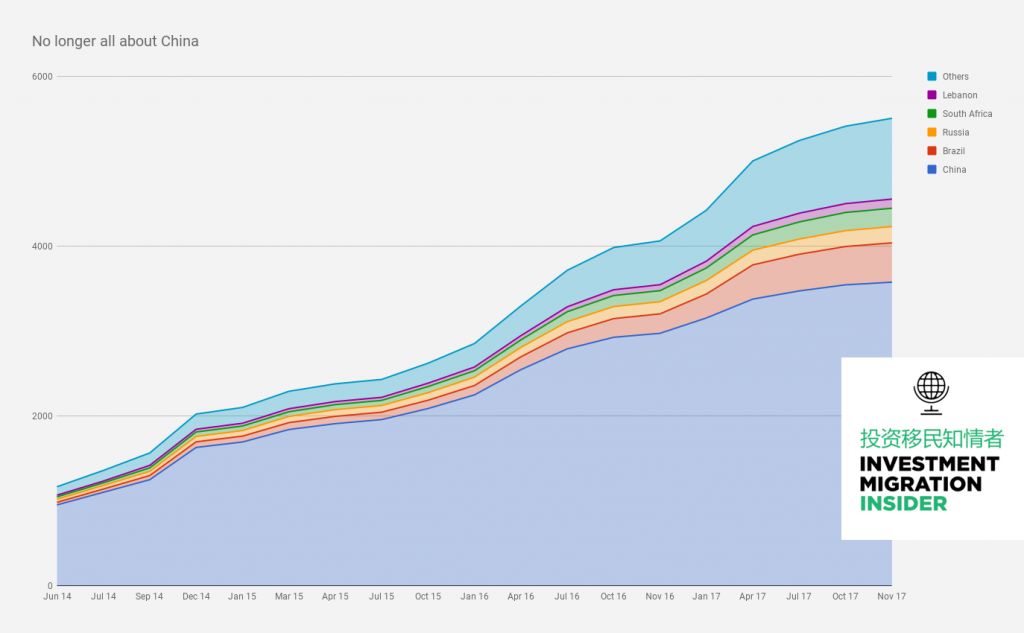 The Malta Residence Visa program, for example, which opened in 2016, reports that some 60% of applicants hail from China. In the Greek and Spanish Golden Visa programs – both of which opened a year after Portugal’s – Chinese nationals make up 43 and 59 percent of total applications, respectively.

While the closing of Hungary’s Residence Bond Programme in 2016 and Canada’s federal Investor Immigration program in 2014 may have helped channel Chinese applications into Portugal’s residence by investment option initially, the introduction of other options appears to be eating into the country’s share.

Watch: Get With the Times or Face Extinction, Says Head of Chinese Migration Firm

But what could really slash demand for European golden visas as a whole is the upcoming EB-5 bill, which industry experts have commented could include a reinterpretation of the 10,000 applicant quota to not mean 10,000 individuals but, rather, 10,000 main applicants, potentially increasing the actual quota to more than 24,000.

The 27,000 Chinese applicants waiting in line to get into EB-5 attest to the United States’ special place in Chinese hearts, suggesting a sudden expansion of available EB-5 tickets would go a long way toward vacuuming up demand from residence by investment programs elsewhere in the Western world.

How Spain Became a Golden Visa Powerhouse Without Even Trying

February 20, 2020 Editor Comments Off on How Spain Became a Golden Visa Powerhouse Without Even Trying
China Editor's Picks

February 9, 2020 Editor Comments Off on Kremlin’s Lifting of Restrictions on Dual Citizenship Could Pave Way for Russian CIP

December 4, 2019 Editor Comments Off on Inform Your Client: Don’t Wait to Apply for Citizenship Until It’s Too Late

Which RCBI-Jurisdictions Score Highest on The Global Health Security Index?

2019 a Record Year for Grenada CIP: Real Estate Outpaces Donations For the First Time in 4 Years

January 15, 2020 Editor Comments Off on Greek Golden Visa Has Raised Some €2 Billion From Almost 19k Participants